Kansas Budget can be balanced without a tax increase 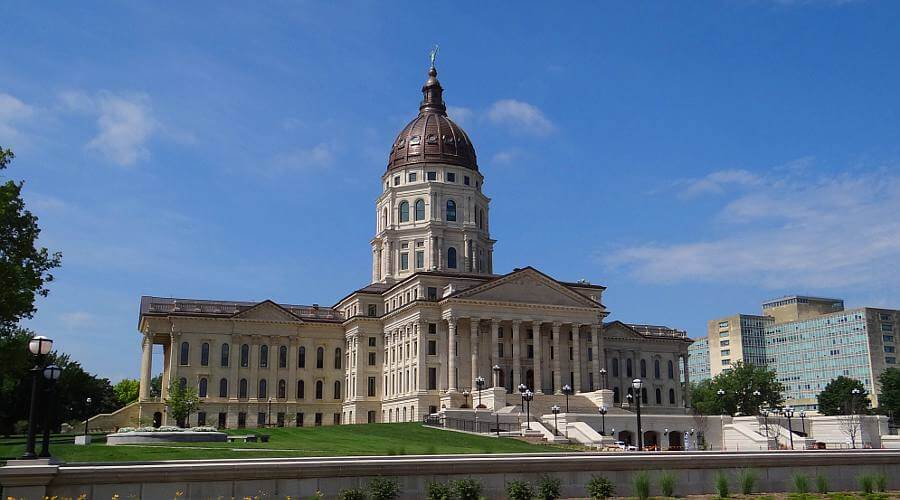 Ronald Reagan could have been speaking of the 2017 Kansas Legislative Session when he said, “Government is like a baby. An alimentary canal with a big appetite at one end and no sense of responsibility at the other.”

Despite knowing that state spending is morbidly inefficient (27 percent more per-resident than states without an income tax) and is $1.1 billion above long-term inflation, Democrats and many Republicans insist that citizens must be sent back the Tax Dark Ages because baby wants an enormous tax increase.  The most recent Kansas budget profile from the House of Representatives, however, shows that no tax increase is necessary.

The House Appropriations Committee has 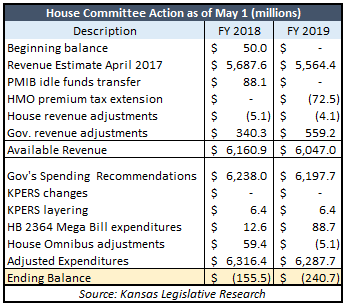 whittled the shortfall to just $396 million over the next two years.  (Media knows this but aside from perhaps Hawver’s News Service, it hasn’t been reported.)   The Governor’s revenue adjustments in the adjacent table includes highway transfers consistent with prior years and eliminates $200 million in phony transfers that were never going to happen (something else media knows but won’t report).  The Governor’s spending recommendations include deferring some KPERS pension funding payments and cost saving recommendations from the Alvarez and Marsal efficiency study.

There are multiple options remaining to balance the Kansas budget, have healthy ending balances and have a little left over to resolve the school funding issue.  Securitizing (selling) future tobacco settlement revenues would generate at least $265 million each year.  Collecting a royalty from the Turnpike Authority of 15 percent of toll revenue is would increase revenue by $33 million over two years.  The 2016 audited financial report shows KTA had a $37 million dollar ‘profit’ last year and finished the year with $120 million in cash and receivables.

There are also two big options to reduce costs.  Local school districts began this year with a record-setting $911 million in unencumbered cash reserves, much of which represents aid collected in prior years but not spent.  Alvarez and Marsal recommended cash reserves be limited to a maximum of 15 percent of current operating costs, with any excess being deducted from the following year’s state funding.  Based on 2016 spending, doing so would produce a one-time savings of $196.5 million next year.

Last year, the Legislature required the Governor to make spending reductions at the beginning of this fiscal year and the same could be done again.  Reducing baseline costs by $100 million (about 3 percent of General Fund spending other than K-12) would produce $200 million in savings over two years.

The combination of these revenue enhancements and spending reductions provides a $960 million menu of options to close a $396 million shortfall.  Some of those options may not be ideal policy but each is much better than foisting a large, unnecessary tax increase on citizens.

A number of newly-elected legislators are openly saying their goal is to impose an enormous tax increase and they don’t care if doing so means they won’t be re-elected.  The unspoken part is that they effectively were ‘hired’ by the school lobby to take Kansas back to the Tax Dark Ages and they intend to give them their money’s worth.  These legislators are well aware that only 4 percent of citizens say a personal income tax hike should be the primary means of balancing the budget.  Still, they want citizens to pay hundreds of millions more annually in addition to nearly $200 million more per year by repealing the exemption on pass-through income for the small businesses that are creating 98 percent of new job growth.

Requiring government to operate more efficiently generates a lot of backlash from the entrenched bureaucracy and special interests, making it politically easier to vote for tax increases.  But President Reagan would say it’s time for legislators to act responsibly on behalf of citizens and balance the Kansas budget without a tax increase.