Kansas budget can be balanced without tax hikes 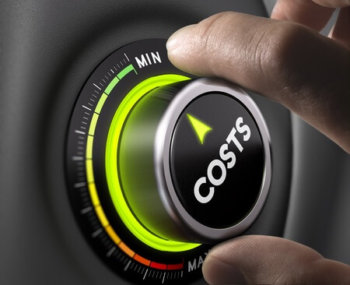 Yes, that’s right, the Kansas budget can be balanced without a tax increase.  But first, here’s some background to put the situation in perspective.

When the Legislature raised the sales tax rate in 2015 as part of the largest tax hike in Kansas history, many legislators, special interests and media expressed outrage at the impact on the poor and the middle class.  Now, many of those same people are cheering for an even larger tax increase that further hurts the poor and middle class and retains that nasty sales tax hike.

That Jekyll/Hyde concern for citizens is mostly raw politics. Self-described conservatives were understandably excoriated for raising taxes instead of reducing the cost of government but Democrats and moderates are praised for doing basically the same thing.  (This ‘burn it down’ strategy has been playing out for several years.)  It’s certainly not a matter of necessity because the Kansas budget can still be balanced without a tax increase.

For starters, the real budget shortfall is $356 million less than the $1.1 billion being reported; the inflated number includes $199 million in transfers to local government that haven’t been funded since 2004 and $131 million in assumed school funding increase.  Plus, it doesn’t count $26 million of excess revenue since November.

There are many ways to assemble the final package and balance the Kansas budget but these modifications to the Governor’s Budget Proposal present one option:

Including two other minor 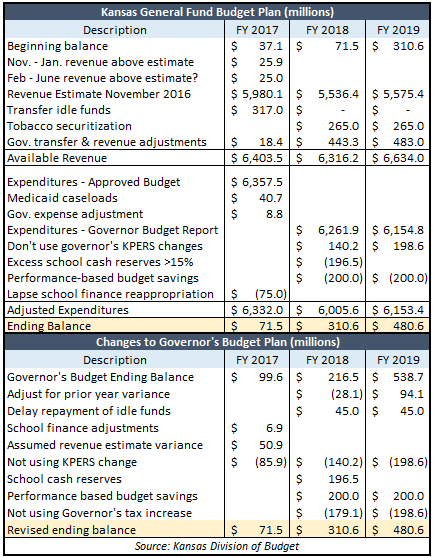 changes, ending balances would be $310.6 million next year and $480.6 million the following year.  This option includes highway transfers and securitizing tobacco revenue, which may not be ideal policy, but that’s preferable to permanently increasing anyone’s tax burden.

The main reason for Kansas budget shortfalls is that Democrats and many Republicans refuse to make government more efficient; instead, they raised taxes and increased spending in 2013 and 2015.  It may be hard to believe but spending is actually budgeted to set another record this year; to put that in perspective, spending would be $1.1 billion less this year if it had just been increased for inflation since 1995.

There’s more.   Every state provides the same basic basket of services but some do so at much better prices, and that allows them to tax less.  In fact, the states that tax income spent 42 percent more per-resident in 2015 than the states without an income tax; Kansas spent 27 percent more per-resident.  It’s not access to natural resources or tourism that allows states to keep taxes low; it’s simply the spending.

Pressure to repeal the exemption on pass-through income is considerable but fairness issue aside, repeal will have a serious economic impact.  U.S. Census data shows that pass-through employers created 82 percent of new jobs in 2013 and 2014 (the most recent data available).  Further, the growth rate of pass-through jobs jumped from 2.4 percent in the two year preceding tax relief to 8.4 percent in the two years since, indicating that the exemption likely played a noticeable role.  How is it fair to those who will lose jobs if the exemption is repealed?

If legislators are determined to raise taxes on small business knowing it will damage the economy, they should use the revenue to reduce other taxes.

The budget can be balanced without tax increases if legislators are willing to follow the lead of states that provide good quality services at better prices.  Doing so creates the best path forward for all Kansans to achieve prosperity and have a shot at the American dream.