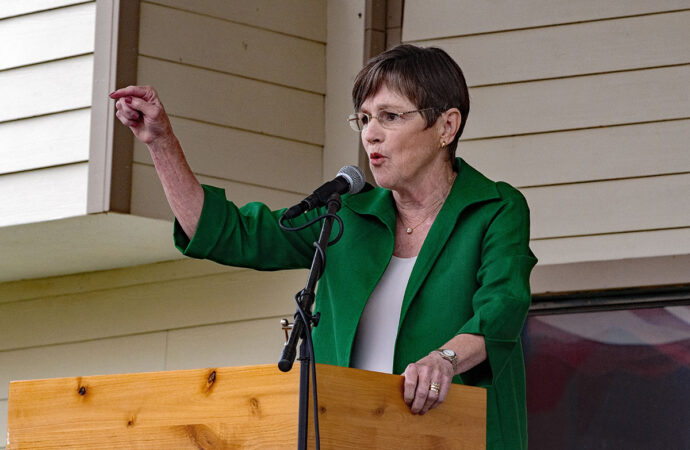 Kelly has called alternatives to her tax relief policies “irresponsible, reckless tax cuts that threaten our state’s fiscal health.” While she is right that relief needs to be coordinated with spending controls, her proposal shuts down any other attempts at serious tax reform.

Kelly’s main proposal is accelerating the phase-out of the food sales tax. The other two tax reforms Kelly suggested – a larger back-to-school sales tax and holiday and eliminating the cliff on Social Security Income Tax – would cost $5.5 million and $20.5 million respectively.

Projections by Kansas Legislative Research, which include the gradual elimination of the food sales tax,  show the state would finish this year and the next two years with more than $2 billion in reserve plus another $969 million in the Budget Stabilization Fund. That leaves plenty of room to let Kansans keep more of what they earn without  “bankrupting” the state.

Furthermore, if Kelly is worried about busting the budget, attention should be on her proposals to spend (potentially) hundreds of millions more on APEX subsidies for a few select companies.. The section even notes that “these charges have the potential to reduce State General Fund revenues in future fiscal years.” All the while, Kansas’s subsidies like PEAK and STAR Bonds have continually failed to show significant economic improvement relative to their cost.

Any form of tax relief is good. But Kansas should offer more than small savings if the state really is to promote a robust tax environment. According to Kiplinger’s, Kansas is the third-worst state for retirees due to fully taxing private plans and out-of-state pensions.  Instead of tweaking the specifics of the retirement tax, completely eliminate it and impede the outflow of seniors out of Kansas.

Or, keep hundreds of dollars in families’ pockets while also making a reform highly cohesive to economic growth by reducing the income tax. Last year, five states including economically similar competitors like Iowa and Idaho went down to a flat tax, whereas Kansas remains the sixth least friendly state for middle-class families because of higher than average income and property taxes. Kelly’s food sales tax proposal would only save $4 per week on a $100 food budget; that pales in comparison to an income tax reduction by going to a flat tax model, which would save families hundreds of dollars annually.

The Governor’s $24.1 billion Recommended Budget comprises $9.5 billion in General Fund expenditures, $6 billion in federal funds, and $8.6 billion in Other State Funds. All told, Kelly proposes to increase spending by $1.6 billion over two years, putting the budget a cool $10 billion higher than long-term inflation. 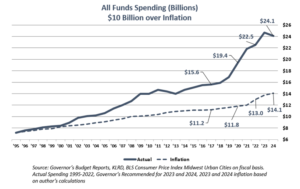 Perhaps the biggest spending proposal in Kelly’s budget is Medicaid Expansion. While the budget and its report focus on how federal funding will cover costs for the next 8 years, that begs the question of the budget strain after the federal cash dries up. The prospects are not good. Costs per enrollee for Medicaid expansion are 64% higher than projected. In 2020, one in five dollars spent in Medicaid was an improper payment, totaling $86 billion in waste nationwide in that year alone. Furthermore, Medicaid patients wait longer and are less likely to successfully schedule primary care appointments than private insurance holders. Only 20-40 cents of every dollar spent on Medicaid directly improves the welfare of recipients.

The budget includes a  $72.4 million increase for special education over each of the next four years, arguing that Kansas is below its statutory 92% requirement. However, the problem isn’t a lack of funding; it’s that the funding formula doesn’t account for all of the aid provided for special education.

The Department of Transportation has a recommended one-time spike in expenditures by just under $800 million for FY 2023, albeit without an increase in federal funding from the previous year, before going back down in FY 2024. What one-time spending or transfer is happening here? The current report does not indicate if this is one single expense or transfer or a series of multiple instances.

Transfers across the government need to be tracked too. Tucked into the literal second-to-last slide of the budget presentation is a $200 million shift in FY 2024 in the school capital improvement aid, which is a transfer elsewhere. The Governor’s Office is proposing a $220 million transfer from the General Fund to an Infrastructure Leveraging Fund to take advantage of federal matching.

The steady increase of cash going to hundreds of programs should be questioned relative to Kansas’s performance-based budgeting metrics as well. Instances of failing or poorly defined metrics on the part of agencies and their bureaucracy warrant questions about their effectiveness.

The $18.07 in state spending comes in just below Kansas Policy Institute’s Responsible Kansas Budget, which limited State Fund expenditures to $18.2 billion based on the rate of population growth and inflation.  But this doesn’t mean that big spending shouldn’t be questioned – especially hen it’s projected to be $10 billion over what the budget grew tied to inflation since 1995.