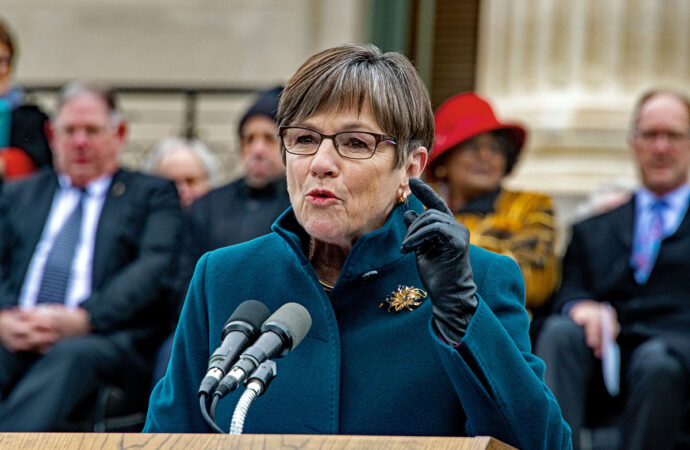 President Obama once publicly admitted that it is a bad idea to raise taxes in the middle of a recession. And yet, under an unprecedented COVID economic downturn, Gov. Kelly’s budget has not one, but two tax increases. These tax hikes financed a record-setting state budget, 29% bigger than in 2017. By contrast, the Governor could have submitted a plan that provides tax relief, eliminates waste, and sustainably cushions state finances against the next recession, as our Balanced Budget Plan outlined.

Despite a new economic landscape and a new legislature that is more devoted to returning resources to Kansans, Gov. Kelly proposed a budget near-identical to her proposal last year. In it, the Governor wishes to

Last year, the legislature rejected Gov. Kelly’s new tax on digital products, re-amortizing and increasing pension debt, PMIB loan repayments, and Medicaid Expansion. With a more conservative legislature, it seems unlikely that pushing the same budget will change their minds. This budget proposal presents a considerable danger to state finances and Kansans’ economic recovery outside of politics. In this way, the Balanced Budget Plan comprised of KPI is a superior framework. 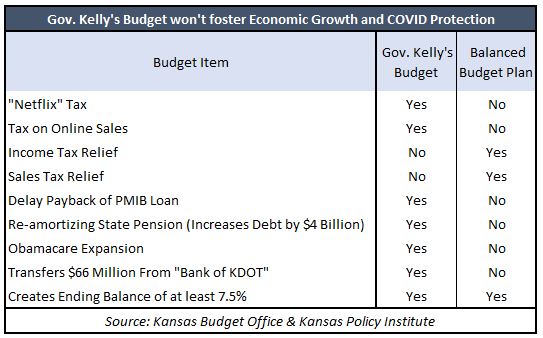 The adjacent table compares the primary initiatives in Gov. Kelly’s budget with KPI’s Balanced Budget Plan. Gov. Kelly’s budget intends to place a tax on digital products (e.g., streaming services) and online sales. That’s a tax increase on roughly $1.3 billion in consumer sales.  Additionally, Gov. Kelly’s budget plan does not provide any income or sales tax relief. Gov. Kelly’s budget also delays repayment of a loan from the Pooled Money Investment Board, excess funds of Kansans’ unclaimed property. Gov. Kelly also wishes to re-amortize public pension debt. Think of it like refinancing a mortgage but not getting a lower interest rate out of the deal. You can make smaller scheduled payments, but the longer horizon and interest rate means you take on more debt. In this case, an additional $4.4 billion in long term debt (per Reason Foundation). Obamacare expansion and transferring dollars out of the highway fund round out the Governor’s major spending plans, creating a new record level of spending. Using gimmicks and the very things she bemoaned in her speech does not make a sustainable, “pragmatic” budget.

Kansas lawmakers do not have to settle for Gov. Kelly’s budget proposal. It adds more debt, taxes Kansans living paycheck to paycheck, and is unsustainable to finance more spending today. Lawmakers have another option. The Balanced Budget Plan is just one of many options to avoid fiscal imbalance by eliminating waste, returning more resources to Kansans, and protecting the state budget from future economic swings. Lawmakers don’t have to follow our budget to a T, but a focus on crafting a taxpayer-focused, sustainable budget is the right idea in the middle of a recession.