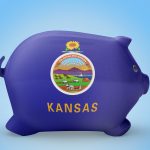 This month, state forecasters and legislative researchers announced a $119 million budget shortfall by the end of the fiscal year 2022. However, they failed to mention that closing the budget shortfall would leave the state with a zero-ending balance with no room for error. Come January 2021, Kansas policymakers have an opportunity to turn this budget shortfall into a budget surplus. All it would take is for legislators not to suspend one Kansas statute.

The Consensus Revenue Estimating (C.R.E.) is a group of state agency analysts and university economists forecasting Kansas economic conditions. The purpose is to bake these economic projections into a forward-looking state budget. Their estimation of the state budget still shows a shortfall two years out. However, this projection assumes the state legislature waives Kansas statute (K.S.A) 75-6702, which requires reserves to be at least 7.5% of annual spending.

Table 1 shows how Kansas Legislative Research calculates the $119 million deficit in the fiscal year 2022 (July 2021 to June 2022).  The yellow bar notes the state general fund (S.G.F.) ending balance under the assumption K.S.A. 75-6702 is suspended. As a percent of spending, note the ending balance falls from a high of 15.7% to -1.5% by 2022. Kansas legislators would have to reduce spending or raise taxes or implement short-term gimmicks to balance it. However, C.R.E.’s budget snapshot only creates a zero-ending balance, with no room for a policy that shrinks the size of government or returns more resources to Kansans. 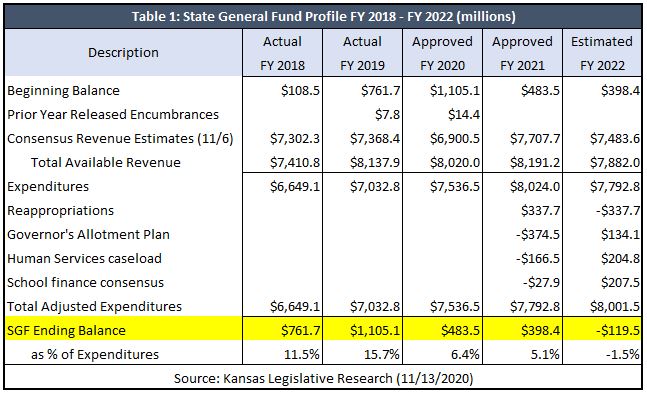 In Table 2, the green row presents the same S.G.F. ending balance, with one minor adjustment; it follows K.S.A. 75-6702. If we follow this state law, the state’s shortfall grows to roughly $720 million by 2022.  However, it also creates a great opportunity. Following K.S.A. 75-6702, and balancing the budget under it, grows the state’s ending balance to roughly $600 million in fiscal years 2021 and 2022. It means policymakers could prevent wild swings in state spending, allow for the consideration of tax cuts, and restrict government growth. 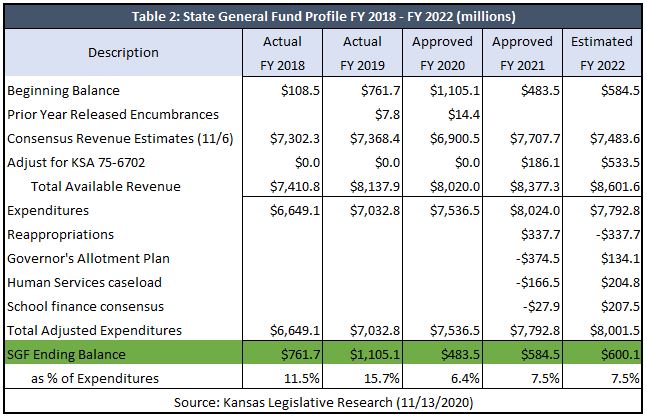 K.S.A. 75-6702 calls for a minimum of 7.5% ending balance. Having a state financial cushion protects not only the budget but also Kansans. Recessions are known to lower tax revenues while increasing demand for social services. A healthy ending balance ensures the government can provide quality social services to Kansans without raising taxes. Additionally, the state can return resources and lower the government-derived cost of doing business in Kansas.

In 2019, the Governor vetoed efforts to return 100% of the 2017 federal tax cuts to Kansas families. In 2019, the Governor unilaterally raised taxes on out of state sellers against the U.S. Supreme Court’s guidance. This raised taxes on Kansas commerce and families. Finally, the Governor vetoed property tax reform that would have held local leaders accountable for sneakily raising property taxes. For Kansas to see a robust economic recovery, they should see more of their resources returned.

Fiscal discipline is understandably difficult, but it is the right path to take. Cutting the state budget while maintaining quality services is feasible. Such a budget will be the Kansas Policy Institute’s focus for the state legislature come January. For instance, the legislature can pull back discretionary spending like lobbying to create more savings while not risking quality services. We will create a pathway for policymakers to control the state budget. In return, policymakers can hold their heads high to eliminating the current deficit, structurally balancing the budget, improving Kansans’ prosperity, and hedging against the next recession.