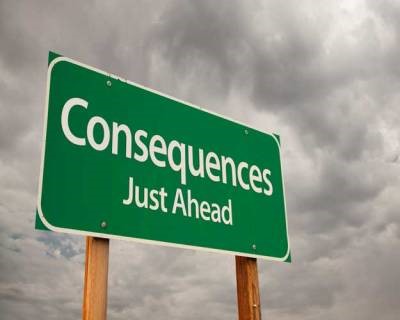 Updated estimates from the Kansas Legislative Research Department (KLRD) show Kansans could be on the hook. This time for a massive $1.1 billion tax increase over the next four years. This tax increase does not include the $600 million tax increase approved by the state legislature this past session. This year, the state’s revenue estimate of $7.3 billion includes a large transfer from the state highway fund. Roughly $300 million was taken out of the, sometimes termed, “Bank of KDOT”. Spending is on track to grow 2.4% a year while revenues clip at a slower 1.4%. Kansas is deficit spending again, despite the largest tax hike in state history in 2017.

This KLRD report acts like a checkbook of the state’s finances, projecting out to fiscal year 2023. No budget gimmicks. Instead, it tells us the tax increase needed to keep a 7.5% ending balance. 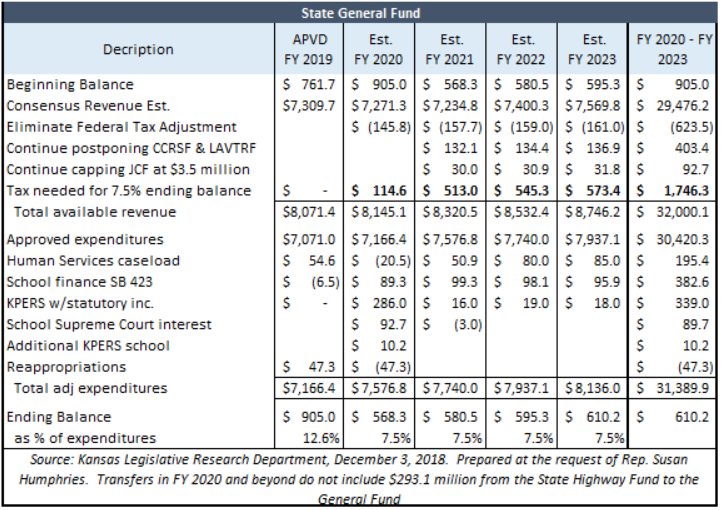 When this report was released in early August, information at the time pegged Kansas state government having a deficit of $3.7 billion dollars. The deficit is lower today because KLRD is using a higher guess on tax revenues in fiscal year 2020 and beyond coupled with slightly lower estimates on state education and human services spending.

This report does not include spending initiatives outlined by the incoming administration. Including such initiatives will likely make this report even more troubling. Governor-elect Laura Kelly campaigned to increase school funding, expand Medicaid, and cut the sales tax on food, as a few examples. Governor-Elect Kelly rightfully criticized the Brownback Administration of growing the gap between state spending and revenues. However, fiscal prudence now seems to take a back seat to plans that grows state spending and depletes reserve balances.

There are ways tax increases can be avoided. Perhaps the administration can make their government more efficient. Such opportunities for efficiency are prevalent when observing that Kansas state government spends $1000 more dollars per resident than no income tax states with the same or higher demand for government services. They can slow spending growth by avoiding the Medicaid Expansion trap, or by holding schools accountable instead of writing blank checks. Another option is to play budget gimmicks and “kick the fiscal imbalance can” down the road. Governor Sebelius, and other prior administrations, used these same tactics ironically. These includes sweeps from the “Bank of KDOT” and delaying KPERS and state pensions payments.

As Governor-Elect Laura Kelly’s budget gets closer to being proposed, Kansans should take great care in reading news coverage of Kansas’s fiscal situation. The Kansas City Star was quick to report that the state has $900 million in extra revenue and immediately outlined how extra taxpayer dollars should be spent. The Associated Press reported that Kansas’s fiscal outlook allowed Governor-Elect Laura Kelly to boost spending without raising taxes. These claims made by the media are wrong. Media only reports the ending balance for 2019. Like your checkbook, when you spend more than what you deposit, the ending balance goes down. KLRD reported a negative ending balance and deficit spending by 2020.

Kansas isn’t flush with cash, it is on the road to another fiscal crisis. A potential tax increase is on Kansans’ doorstep, and yet they haven’t been informed. They deserve to know the truth.