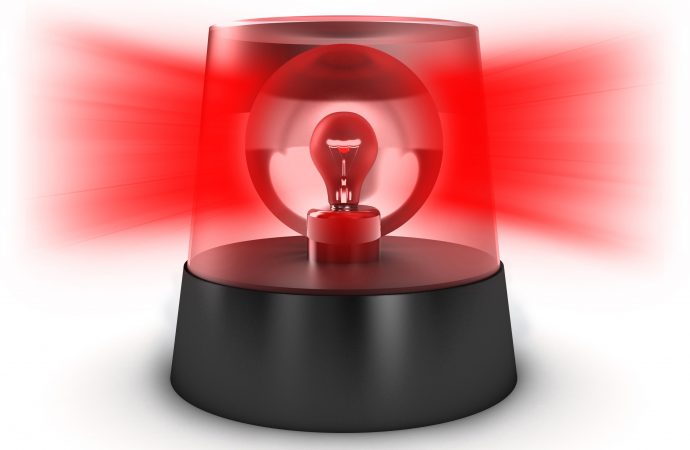 In mid-August, a national warning sign flashed red, sparking stock market turmoil and possibly suggesting the next U.S. recession is roughly two years away. If true, then Kansas’s government is woefully unprepared given its $1 billion-plus deficit.

Headlines reported an inverted yield curve**, where the interest rates (yield) on short-term bonds are higher than interest rates paid by long-term bonds. This market signal has a formidable record for predicting recessions going back to 1969.  A recession has followed any time the red line in the chart dipped below zero. The most recent time was December 2005, two years before the official recorded start of the Great Recession.

How does an economic recession affect government budgets? In a recession, there is elevated unemployment, depressed wages, and contracting business activity. The demand for social services grows, raising government spending. However, it has an additional effect of decreasing tax revenues. After the Great Recession of 2008, state tax revenues plummeted 7.84% in the fiscal year 2009, and 4.23% in the fiscal year 2010. Like any personal budget, a rainy-day fund is essential if there’s a substantial drop in income. Kansas’s rainy-day fund is set to dwindle every year. 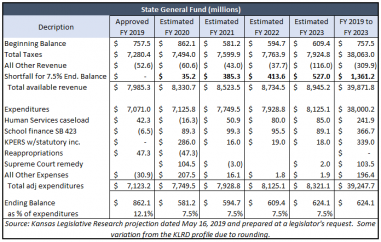 According to the most recent publicly available information from the Kansas Legislative Research Department, the state government will need $1.4 billion to keep the piggy bank filled according to state law. While updated shortfall estimates are forthcoming, it’s notable these depleted savings occur under an economic expansion and rosy expectations. If the state deficit will be massive under good times, how big will it be during the bad? Are Kansans’ prepared for an emergency tax increase into the billions to keep core services afloat?

Let’s be clear; no one is hoping the economy goes into recession. However, one cannot ignore signs pointing to an economic contraction happening sooner than later. As for state government, there wouldn’t be much of a worry if shrinking tax revenues led to efficient spending. However, far too often state spending eclipses revenues and policymakers choose short term fixes or massive tax increases instead of addressing state spending itself.

With the recession clock set and ticking, it is crucial to get the government’s fiscal house in order. The first step is admitting that state spending is a problem. The next step is to institute readily available solutions. The Kansas legislature has already passed Performance-Based Budgeting, however, it has yet to be enforced. Policymakers can follow neighbor states like Texas and devote a commission to address unnecessary and inefficient government programs and agencies. Governor Kelly pledged to be “cautious, conservative, and fiscally responsible” because a recession could be around the corner. Signs show Governor Kelly is right about an incoming recession. However, one doesn’t prepare for financial hard times by spending at record levels and emptying bank accounts.

** The chart below notes the spread or difference between the yields of a 10-year bond and a 2-year bond. Most of the time, the spread is in positive territory, suggesting the 10-year yield is larger than the 2-year. When the spread turns negative, that means the inverse has occurred. It’s important to grasp an inverted spread does not in and of itself cause a recession. Instead, it’s a gauge of sentiment in the economy that makes it a great leading indicator. Demand drives the yields on T-bills. The more demand for a T-bill, the more the yield for that T-bill drops. If investors will focus more on longer-term bonds if worried about the current economy. A waning economy simultaneously lowers the return on the 10-year bond and raises the yield on the 2-year.