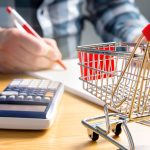 Kansas Governor Laura Kelly this week announced a new initiative to eliminate the states’ sales tax on food. Kansas’ grocery sales tax is the second-highest in the country, so this change would be welcome. However, her plan to make up for the lost revenue with surplus dollars will eventually lead to higher taxes somewhere else in the economy unless spending is cut to offset the sales tax revenue loss.

Cutting taxes without reducing spending happened under Governor Sam Brownback. A large budget surplus helped to motivate massive tax cuts through the legislature. However, because spending didn’t go down (and instead increased), a huge deficit arose, leading to the largest tax hike in state history in 2017. Governor Kelly criticized these shortfalls in her 2018 campaign, so she and the rest of the Kansas legislature – Democrats and Republicans alike – shouldn’t make the same mistakes.

Eliminating the food sales tax would cost about $450 million, so base spending should be reduced by that amount by eliminating wasteful spending.  With General Fund spending at about $8 billion, the question becomes whether state government can operate about 5% more efficiently.  The answer is a resounding “yes.” 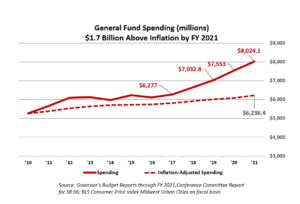 Exempting food from the sales tax would also reduce local government revenue, so local officials must also find ways to operate more efficiently.  Our study of county spending shows tremendous cost-reduction opportunities.  For instance, counties whose populations were between 6,000 to 10,000 people in 2018 varied in their per-resident spending from a high of $3,038.58 to a low of $949.97 with an average around $1,402.61. Despite these counties being roughly the same size, there were some spending more than triple per resident to provide the same basket of services.

Not replacing employees who retire or otherwise leave also has big potential.  Kansas state and local governments have about 37% more employees per capita than the national average; right-sizing local government employment can save up to $2 billion.

Eliminating the food sales tax is a good thing, but Kansans cannot afford a tax shift.  Along with the second-highest sales tax rate on food, Kansas also has the highest rural tax rate on mature businesses, some of the highest effective property tax rates in the nation, and uncompetitive marginal income tax rates.  Responsibly spending taxpayer money by balancing spending and taxation leads to a healthier economic and tax environment in the future.