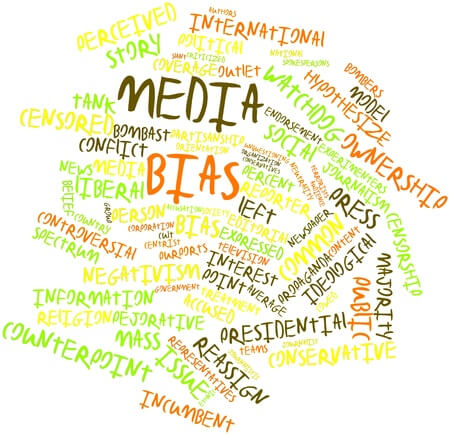 Kansas is on track to gain fewer than 4,000 private sector jobs this year. For context, that is the 2nd slowest yearly growth since The Great Recession ended in 2009. What’s worse, is that most Kansans media outlets willfully ignore this fact.  Instead, since Governor Kelly has been in office, the media reports rosy and inaccurate estimates of Kansas job growth. Kansans aren’t even aware Kansas has the 43rd fastest-growing job market since 2016. Kansans deserve access to information, and that means we must have better economic journalism in Kansas.

In 2014 the Kansas City Star made a rushed conclusion that the 2013 tax reform was a failure. They editorialized that:

However, Friday’s federal figures now show the state has added only a meager 12,200 total jobs for the first 11 months of the year. That’s barely more than 1,000 a month, and a growth rate of under 1 percent for the year.

It seems an unfavorable statistic. A slightly deeper dive would have revealed that the 12,200 total jobs number was a guess. It was a prediction but not a true indicator of Kansas labor market health. If the media had reported the source instead of the guess, they would inform Kansans the state gained 20,000 total jobs. Would the Kansas City Star still consider that a failure?

Fast forward to today and, again, using the preliminary jobs measure, the Topeka Capitol Journal claimed Kansas saw an “expansion of 17,800 jobs in the private sector” in August 2019. Afterward, there were quotes praising Governor Kelly’s policies and rebuking the previous administration’s positions. The truth, however, was Kansas gained fewer than half. The state gained roughly 7,500 private-sector jobs. Why are most Kansas media outlets reporting estimated job numbers instead of the actuals?

To understand why it’s important to realize there are two measures of job growth in the U.S. and states. There’s a preliminary measure called the Current Employment Statistics Survey (CES) and its benchmark, or a hard count called the Quarterly Census of Employment and Wages (QCEW). The media only reports the CES, missing the QCEW, the real underlying data. Since the QCEW is a census of jobs and wages, it is six months behind the CES prediction. We can observe how inaccurate the predictions of CES are, and through it, how inflated the media reports of Kansas job growth is.

The chart below plots private-sector job growth from the CES and QCEW. For the first four months of 2019, CES was in line with the hard count of private job growth. However, since May, the two-job measurement diverged drastically. In other words, the actual Kansas private-sector job growth was less than half of the CES reports, reports commonly used by the media. If we extend the trend out, Kansas private sector jobs are on track to be roughly 10,000 jobs lower than what the media reports.

The table below compares the annual job growth rate of CES and QCEW over the last decade. To note, after QCEW completes a full year of surveys, the CES is revised to match the QCEW; eliminating the differences. From 2009 to 2018, discrepancies in job measurements (third column) never exceeded 0.3% percentage points. However, in 2019, CES jobs are roughly four times higher than actuals. That’s a difference of 9,500 private-sector jobs. If you include the first 9 months of 2019, the difference between CES and QCEW falls to roughly 4,700. Until these numbers are finalized we won’t have confirmation that Kansas is likely to experience it’s 2nd slowest private-sector job gain since the recession ended. However, all signs are pointing to that fact. 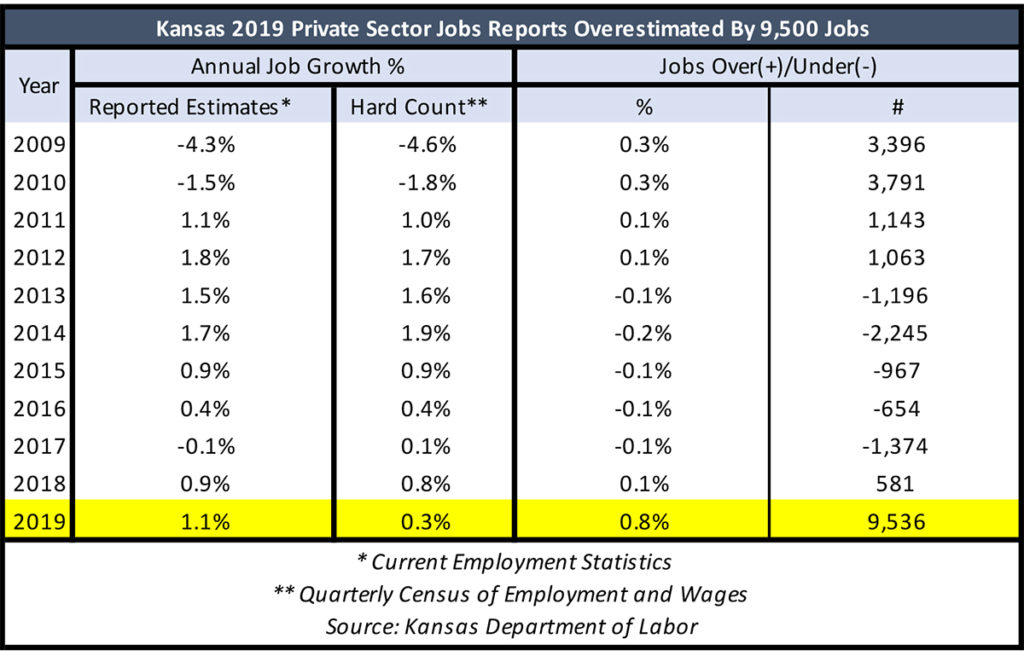 Such anemic job growth falls in line with the fiscal policies put in place since 2017. Kansas has set up significant barriers to job growth in recent years, with current policies hampering their success. The state’s regulatory code takes nearly a month to read. The state is home to the highest property tax rates for commercial property in the nation. Also, 75 percent of 10th-grade students are not on track to be college or career ready, which dampens the ability of future Kansans to find suitable work and growing wages. The media reports little of this.

To put sound policies in place to treat the problem, one must first be honest and open about the problem. In Kansas, it appears the old saying is true. If you don’t follow the news media, you are uninformed, but if you do, you are misinformed.