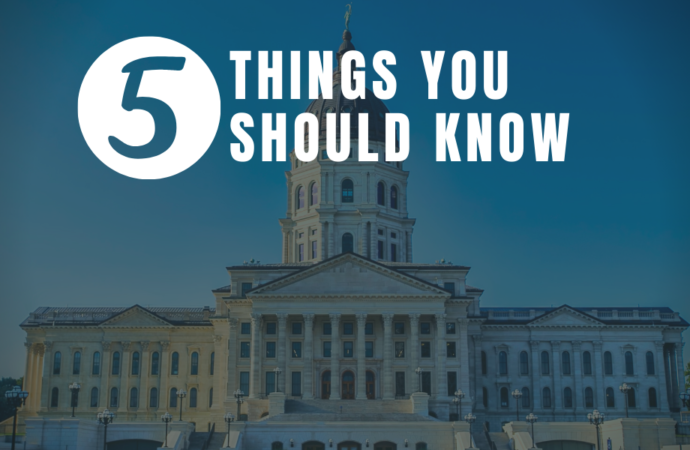 Governor Kelly had an opportunity to exhibit fiscal restraint when presenting her budget last week. With state tax revenues coming in higher than expected – partly because of recent record tax hikes – the Kelly Administration missed a chance to build a structurally-balanced budget. Instead, this budget breaks a new record in spending for the second straight year, spends half a billion dollars more than what it takes in, raises taxes, and expands Medicaid. Here are five things you should know from Governor Kelly’s 2020 Budget.

The Governor’s budget sets a new record of spending from the state general fund at $7.8 billion. That’s an $800 million increase from 2019 and growing roughly $600 million faster than tax collections. With spending growing that much more quickly than revenues, the state’s ending balance fell to $533 million, or 6.8% of expenditures.  According to Kansas statute, the Kansas legislature’s last appropriation bill must have an ending balance equal to 7.5% of spending. This ending balance serves as a rainy-day fund, aimed at insulating government from erratic changes. The Kansas legislature will have to make changes to the 2020 proposal to honor state statute. It’s worth bearing in mind that administrations and legislatures from all political walks of life regularly ignore this rule. It is commonly bemoaned by those out of power but readily embraced when roles reverse.

It’s the second consecutive year there has been a proposal to re-amortize the Kansas pension payments. Last year, the state legislature roundly criticized and rejected the proposal. Kansas re-amortization of KPERS to make smaller payments in the short term is akin to making the minimum payment on a credit card bill. In other words, the lower the contributions Kansas makes today, the higher contributions must be tomorrow.   As such, KPERS executive director Alan Conroy estimated the Governor’s proposal would cost over $4 billion in additional contributions over the next 25 years.

For nearly two decades, countless politicians claim sweeping funds from the highway fund is a terrible policy. Yet, the latest proposed budget disregards those warnings of the past. Sweeps from 2019, 2020, and 2021 from the”Bank of KDOT” totals $633 million.

The 2020 budget provides a sales tax on digital property & market facilitators, a food sales tax credit, and a transfer of state taxpayer dollars to local governments. However, none of these provisions will lead to widespread and effective relief. In fact, half of these provisions raise taxes on Kansans. The food sales tax credit is technically an existing income tax credit made refundable. In other words, it’s an income tax credit for those who owe zero state income taxes. That is not tax relief. The transfer of state dollars to local governments is also not tax relief, as this policy has failed to provide tax relief in prior years. What remains are the tax increases on the digital property and individual sellers on online marketplaces (Ex. Someone selling handmade jewelry on Etsy or Facebook Marketplace).

Despite not listing Medicaid Expansion in the budget profile, the presentation talked about expanding Medicaid as part of ObamaCare. However, forcing citizens off private insurance and onto welfare is hardly a responsible goal. Medicaid Expansion diverts taxpayer dollars from those who are genuinely needy. Expansion doesn’t make Kansans any healthier than private insurance or traditional Medicaid. Most importantly, most expansion states have underestimated the cost of the program, leading to an accelerated growth of government.

According to the National Association of State Budget Officers, a structurally sound state budget is where ongoing revenues meet or exceed continuing expenditures. The budget now under consideration by the legislature doesn’t meet this standard. With forecasts of higher state revenues, there are opportunities for fiscally responsible policies. Instead, the Kansas government is on a path to grow beyond its means.